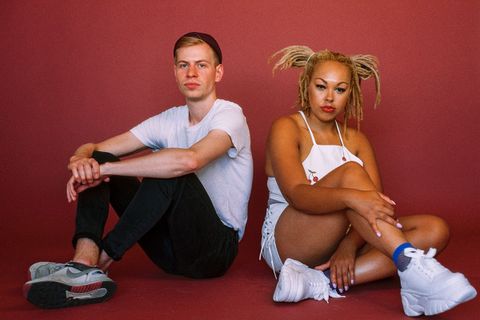 UK R&B singer Harleighblu and neo-soul & hip-hop producer Bluestaeb have come together to form a duo. Their latest song ‘Queeen Dem’ is the third single off of their upcoming joint album ‘She’, which will be coming out on October 11th. We caught up with one half of the duo Harleighblu to find out more about the woman behind the music.

What is your inspiration behind the latest song ‘Queeen Dem’?

I wrote the lyrics to the track Queeen Dem (pronounced like ManDem) after being inspired by the poem “this is for the women who don’t give a fuck” by Janne Robinson. The poem reads ‘this is for the women who drink too much whisky, stay up too late and have sex like they mean it’ – it really spoke to me. I tried to capture the strength of the poem, with a nod to the inspirational Janne. And elaborate on the empowering poem, with my own take on completely owning your own womanhood… Within writing the first few lines, I entitled the piece Queeen Dem (with three e’s to highlight the highest level of royalty!)

As a woman how do you feel empowered?

I read somewhere that self love in this day and age is one of the biggest acts of rebellion… I think there’s some truth in that ideology. I feel we can often get encouraged by society to feel bad about ourselves as women. Too fat, too thin, too pretty, not pretty enough, too strong, not strong enough, too emotional, too opinionated, hard work, a diva, a slut, a bitch… the list is endless and so are the pressures that go along with it. So I decided in writing Queeen Dem, I was going to unapologetically big up women in every – single – sentence of the song instead.

You have a collaboration album set to drop in October with Bluestaeb? Could you tell us a bit about your album and how you and Bluestaeb met?

“She” is the title of the album – She is empowered, She is unapologetic, She is unique, She is you or me. I feel this album is the action & reflection of being a 20 something girl… The plight of being a young woman dealing with love & relationships alongside the societal changes of the world. With each track being a short story in itself; you can hear which perspective takes center stage, some days she feels like a superwoman (Queeen Dem), some days she needs to be saved (Kettle On). I hope this album is a healer, it’s a young black British girl’s insight – that is relatable to everyone I think.

Our debut track Cake will always be a stand out track on the album to me… it signifies the beginning of myself and Blue’s journey.
The track is about going for what you want in life, having your cake and eating it too… And it is very much how I discovered and approached Bluestaeb to work with. I heard his music for the first time in Jazz Cafe London a few years back and I remember going up to the DJ asking who this incredible artist was… after I found out his name I tweeted him, and unfortunately got ignored ha ha! But I didn’t give up there, I knew we could cook up something special if given the opportunity to. Eventually I got through to him, after I persisted with my people who eventually contacted his people and the rest as they say is history. London is referenced through out the album, as I pinpoint this city as the beginning of most of my creative ventures including this one!

How did you both get your start in music?

I think Blue started making beats from an early age, he’s a huge fan of J Dilla. Berlin has a sick underground hip hop scene, that is really impressive. He cut his teeth in that and eventually gained attention from the likes of Jakarta Records. I’ve been singing and songwriting from a early age also, I was given time to write and record in Nottingham at a community recording studio from ages 7 – the scheme was to keep kids off the streets and I took advantage of the opportunity every single weekend for as long as I can remember! Performing my own songs at carnival from ages 10, from ages 14 I was cutting my teeth singing jazz in pubs and bars with musicians (I would lie about my age as I was legally too young to perform in venues ha ha), at age 18 I started my own band with my original songs, playing across Nottingham and eventually gained national attention due to BBC introducing and Mistajam. Now I tour internationally and I’ve honestly never been happier! I’m a live performer – If I could tour for the rest of my life I would die a happy woman.

What would you say has been your greatest challenge in music?

Coming off a label and becoming independent. Knowing I needed to start again with my team from scratch and actually doing it – new manager, new band, new booking agent, new everything. Then actually doing numbers I’ve never seen before, gaining the most interest I’ve ever had, doing shows in new territories and in countries I’ve never quite reached before, and having more support and becoming more successful than ever – without the label. It was the greatest challenge with the largest reward.

How do you feel about the current music scene in the UK embracing your sound? What have been the highlights of your careers so far?

It’s cool! As an artist, the type of art you make will always come first though – either it’s trendy or fashionable or the “in sound”. I try not to watch what other people are doing or I feel you can get lost if you aren’t careful. One thing, I have always been called an old soul from people which is nice. I guess they mean my lyrics and sound, which is a compliment. My idols were all called the same kind of thing too – Erykah Badu, Amy Winehouse. I would describe them as classic… Music that will stand the test of time. And it’s nice the UK are now embracing this classic sound more. I’m super happy to be a part of the wonderful scene that has emerged over the last few years in this country, the music that is coming from our scene is world class and it’s great to be recognised as part of that. But even if there was no scene – I would still be making this kind of music, always have. It’s my truth! One of the highlights of my career so far has been playing this new album out to Lollapalooza in Berlin a couple weeks back. I headlined my stage and it was honestly such an incredible day.

How do you define success?

I honestly don’t watch numbers. I don’t believe it has any reflection on real art. Let’s not forget Mr Blobby had a number one once! Ha
I don’t think anyone else can define success for you either. It’s an individual thing. Some people think money is success, some people think happiness is. A lot of people would say fame measures success somewhat, but you might go on a reality talent show and be famous for 15 minutes yet once the hype dies down never be booked for a gig again because of the association. I honestly think remaining about the art and achieving recognition and respect within your genre of music is true success. I want to be remembered for my contribution to music.

How important are awards and chart positions to you?

Like I say, I don’t watch numbers. I think we charted in Asia with the single though, which was cool! 😉 Awards have always been a weird one too. I don’t think it means anything. I wouldn’t turn an award away, but equally I wouldn’t quit music because I never got an award! Certain things you can’t even measure in awards or chart positions – Minnie Ripperton is one of the most sampled people in the history of hip hop and yet she died before knowing what her contribution of music was to the world. There aren’t any awards for that…

Who would your dream collaboration be?

Getting to work with Anderson paak or Dr Dre would be a dream come true for me!

Finally putting this album out and touring the world!!! There’s no stopping us. So much more to come.

AiryCakes the Brownie Bakes of Dreams

Locked Down in Loungewear